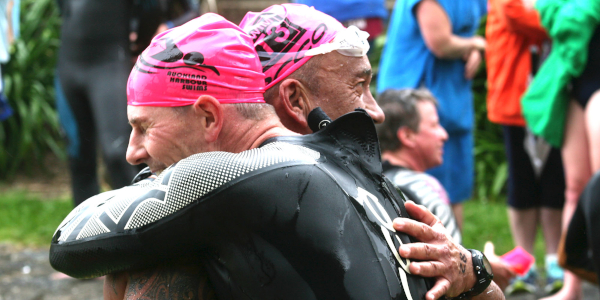 A proud history dating back a hundred years

Today’s swims have a proud history going back to swims held in the early 1900s at Herne Bay and across the harbour when entrants competed for trophies that are still part of our events today.

Organised by the Ponsonby Swimming club, the first of these was the Wai-Wai Shield event, which saw entrants swim around moored boats from the city’s cement works to the old Shelly Beach saltwater baths. Later it shifted to a triangular course, still among moored boats, off Herne Bay Road and Sentinel Road Beaches.

First run in 1912, the Malloy Shield event ran from Chelsea to the same Shelly Beach baths, until these were demolished for construction of the Harbour Bridge, when the finish line was shifted to Curran Street Beach.

The swim changed again in 1984 when its direction was reversed to finish at Chelsea. This also marked the beginning of today’s era, when under the leadership of Bert and Mamie Raper Auckland Central Masters Swimming (Inc) was formed and took up the baton of keeping the events going.

Now run as part of our Watchman’s Island swim, the Wai-Wai Cup and Shield have been presented to the fastest male and female swimmers since 1980. The Malloy Shield remains part of our Chelsea swim, as are the Osborne Cup for fastest female, and the Mazzoleni Cup for first male, dating back to 1939 and 1979 respectively.

The Orca Cup and Chelsea Cups with miniatures are presented to the fastest male and female non-wetsuit in the Round the Island and Chelsea swim.

As our swims have evolved so the range of swimmers has widened. There is still fierce competition for trophies between dedicated swimmers. For many others the swims are a personal challenge. Everyone is welcome to swim at their own pace. (Although there is a cut-off after a set time.)

But whatever sort of swimmer you are the same spirit lives on: volunteers who love harbour swimming organising events for other swimmers who feel the same.

We are a voluntary organisation, open to anyone who wants to join. If you want to help or become a member email us at acmharbourswims@gmail.com.

Financial members get a 20% discount on entries to the swim series and can come to professionally coached pool sessions all year round.

Winter pool training sessions are normally held at the Teps on Wednesdays from 7:00pm to 8:00pm; summer training is at Point Erin, from 6:30 pm to 7:30 pm.

Other swims to look out for

ACM members often meet up with others for sea swims at Takapuna Beach (outside the toilet block) at 8am on Saturdays or on both days of the weekend at St Heliers.

These are not ACM events but include wide groups of swimmers.

For more on the St Heliers swims contact Roger Soulsby at rjsoulsby88@gmail.com